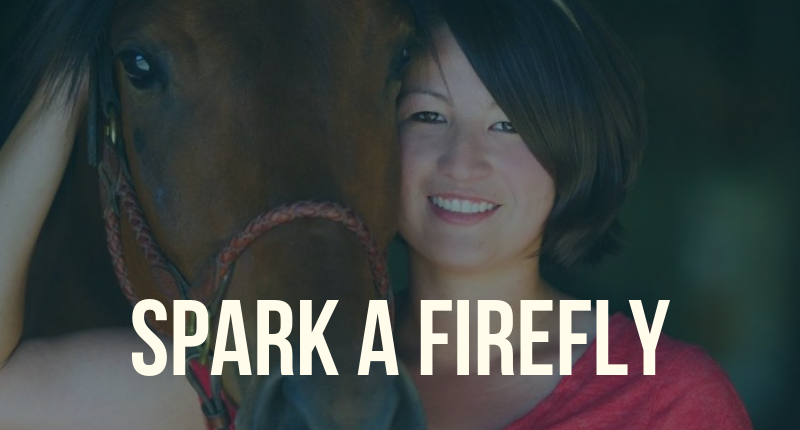 Michelle and her horse, Firefly, live out in Nothern California and are on the road to kicking butt and taking names! She is an eventer with a strong love and deep appreciation for dressage, but very few shows near her offer eventing dressage tests.

“It’s really critical that we can get as many points as possible out of our dressage tests.  It was hard for me to get good feedback about these particular tests (in a 20X40 arena) without doing an entire event or horse trials, so doing an online dressage show was very appealing. For the community as a whole, this is huge!” said Michelle. 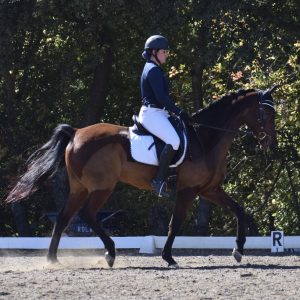 Firefly is an Anglo Arab, out of a Seattle Slew granddaughter and by a Western Pleasure champion Arabian stallion.

She’s been a horse lover for as long as she can remember. Her mom put her in lessons as a 5 year old and she recalls doing every pony ride at every fair they went to. She had the horse bug in a bad way and there was no going back.

As she grew up, it was easy to keep riding, especially since her family moved to the country and bought a farm with horses. Going off to college made the horses a little more difficult, but she managed to land a job on campus that would pay for her horse to come live near her rather than a couple hours away with her mom.

Then, when she was in her mid-twenties, she decided she wanted a project. She found a leggy, solid, bay baby and bought him as an unbroke 2 year old for a bargain bin price. From the very first time she watched him, she fell in love with his big floaty trot and knew he was the one. After passing the vet check, he was home a few days later! 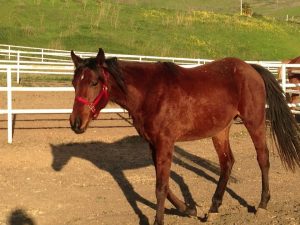 A good friend gave him the nickname “Bird Legs” once and it stuck! Only just recently has he finally (mostly) grown into them.

She started with ground work on him and backed him a little less than a year after she bought him. It was clear he was very bright, but also very opinionated. They’ve had some rough patches – literal blood, sweat, and tears – but they’ve built a great partnership and bond over this last 6+ years.

“He thinks he knows everything and he definitely makes me earn it every time I swing a leg over. Thankfully, I’ve been lucky enough to work with some fantastic trainers to help me bring him along,” she said.

All of his training has been put on him by Michelle – one of the major goals she wanted to accomplish with a horse. However, this also means that all of his problems are her problems, but he’s very honest and helps her be a better rider every single day. 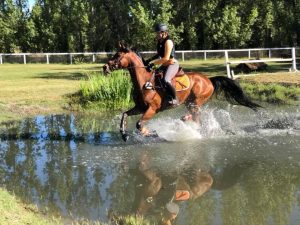 On the ground, he’s quite the character! His two favorite snacks are Mrs. Pastures cookies and peanut butter & jelly sandwiches, he loves cross country jumping and galloping the trails, and he’s known as Doodle (or Dood) to Michelle.

“Around the farm, he’s everyone’s best friend and he’s the first one we go to for turnout when a friend gets a new horse. He loves nearly everyone, human or equine, and is Mr. Congeniality. Even though not everyone may know who I am, everyone seems to know him,” said Michelle. 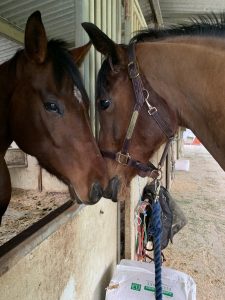 Michelle plans to enter her first true, recognized Three Day Event for the end of May at Novice. After that, she’d like to get back to dressage and give First Level a better try – probably through a Better Dressage Scores show first. Then, who knows, she might even try for Training level! 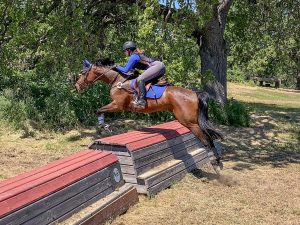 “Our road has been rough at times but I wouldn’t trade him for anything,” she said.

Be sure to follow Michelle and Firefly’s journey on her super cool blog, SparkAFirefly! 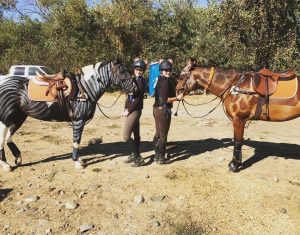 Firefly is a really good sport about costumes at horse shows!