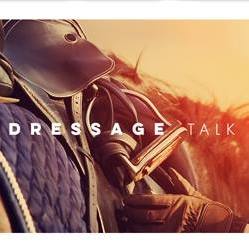 Not much is known about the origin of dressage trainer Kimberly Mitchell’s horse, Oso Grande or “Big Bear” as his name is translated in English. Like many treasures on Craigslist, Bear’s history is a mystery. Mitchell has only been able to make assumptions about things like the gelding’s breed and age, explaining, “Our best guess is Percheron/Thoroughbred based on pictures of other Percheron/Thoroughbreds we’ve seen.”

Mitchell knows so little about her horse’s start that she can sum up his background in just a few short sentences.

“The person who got him before I did found him after he had been left in a field by someone to grow up, and that person had stopped paying board so the owner just had this ragamuffin horse left out in the field. So this girl just picked him up for a couple hundred bucks. I got him about six months after she’d had him under saddle, when she ended up having to move across the country. It was perfect timing, and I was very grateful that she sold him to me at a great price.”

Fueled by a tight budget, and a liking for Bear’s statuesque figure and kind eye – Mitchell remembers calling on a Craigslist ad that featured the young gelding.

“I went to see him and I just felt this connection with him right away and I thought that this could be a fun horse to play around with for awhile.” According to Mitchell, Bear was the “the poor man’s warmblood” she’d been searching for.

Mitchell admits that despite a wonderful personality and a workhorse mentality – the juggernaut gelding wasn’t particularly “built” for dressage. To address Bear’s physical challenges Mitchell enlisted the help of Washington-based trainer Alyssa Pitts, and together they began showing the horse how to use his body correctly.

“After I got him in Oregon I had some personal life changes – I ended up moving back up to Washington and hadn’t put any serious effort into Bear’s training and at that point I moved him to Alyssa’s. We always joke that neither of us really thought he would amount to anything. He couldn’t track up in the trot at that point and he made so much noise when he would work and get seriously out of breath.”

As Bear came back into regular training Mitchell and Pitts realized that something was lacking – his energy level didn’t increase as they had anticipated. Addressing Bear’s health quickly became one of the first steps towards getting him in top physical shape for dressage.

“We had initially suspected that he had PSSM so first we tried a diet change and within a month he was a completely different horse – all of the sudden he was really working hard and had a lot of energy. At that point in time I noticed that if I forgot to get more Vitamin E the next day he would be incredibly lethargic so he was obviously super sensitive to the supplement. If he didn’t get it we couldn’t do the training – I literally had no horse under me.”

With Bear’s energy up Mitchell and her horse began their accession up the levels. However, his heavy breathing didn’t improved with fitness and eventually a vet recommended that they take action.

“He got up to 4th level or attempting to do 4th level, and I got several not so great scores. I figured ‘Well let’s scrape the rest of the show season and do the tie-back surgery’. So we did the tie-back surgery and had a couple of months recovery, and about two weeks into work EVERYTHING clicked. I mean absolutely, everything. He was such a different horse being able to breathe that we went out and did PSG (I mean I obviously had to be careful with him) but we got my PSG silver medal scores at the end of the season. “

Finally, Mitchell felt that Bear was physically at his peak and feeling truly comfortable in his work. However, that didn’t mean that dressage was easy for the draft-cross.

“It’s been a process of teaching him how to actually push because it just isn’t in his DNA to do that” says Mitchell.

“We had to do so much work building the forward and backward with transitions. Send him forward – sit – send him forward – sit – so he could learn how to push. He could sit and carry very early on which makes him very good at things like pirouettes, he really excels at those, but the push he had a really hard time with. Lengenthings have just been the bane of our existence. I still wouldn’t say that we can do a great lengenthing – every once in awhile we’ll get a seven in the lengthenings and it makes me very happy!”

Mitchell realized early on that some movements like extensions would always be very physically challenging for Bear, but she learned to find satisfaction in their training progression. Rather than placing too much value in competitive scores and marks, Mitchell focused on helping her horse to perform to the best of his abilities.

“You go out and you get those scores at each level that are “just good enough”, so the whole time I had to know that he was going to be the “6” horse, not the “8” horse. And that’s what I was really shooting for. It was really important that he was able to have the basics down correctly and be able to do the movements really correctly because he doesn’t have the flash to make up for anything.”

As Mitchell competed in Open classes against other professionals she was aware that Bear was often the only “non-traditional” mount among a sea of fancy warmbloods. For Mitchell, this meant learning to accept that their “best” wouldn’t always be best on the scoreboard.

“I know with every competition that I enter I have to tell myself “There’s a very good chance that I’m going to get last and that doesn’t matter.” Really all I’m shooting for is the best score we can get. For me I just wanted to find out at each level – can Bear do this, and can he do it reasonably well?”

Mitchell admits though that adopting the mentality of always being in competition with herself, rather than other riders and horses at shows, has been a challenging process. She credits both Pitts and Bear for giving her the courage to continue despite disappointments.

“I’d get bad score or I would get frustrated and Alyssa would remind me to keep trying, and to ‘work with the horse you have’ and having her support was a huge factor in keeping me going. And of course Bear himself – the horse has so much heart. Even when I felt like we were struggling he would be trying, he would be trying so hard for me to figure out what I want. He waits for me to just tell him that he’s done a good job. Because of that I thought, ‘well if this horse is still trying I guess I better keep going!'”

Mitchell’s perseverance and positivity paid off this year when against all odds she earned her USDF Gold Medal on Bear.

“I’ve been able to get all of my medals on him, actually. We did it together all along the way. I was pleasantly surprised at the beginning of the season when we were able to finish our Gold Medal at Grand Prix in just two shows. So when I found out our first score at Grand Prix was above 60% I nearly cried because it’s what I’d been working on with Bear for five years so to get there was such a surreal moment.”

Mitchell and Bear’s Gold Medal would be commendable under any circumstances, but turning an abandoned draft-cross into a Grand Prix dressage horse is nothing short of a Cinderella story. Bear is proof that dressage horses can be found in Europe, or just on Craigslist. He is validation that when a horse feels good in his body he can achieve incredible things; and regardless of size, gender, breeding, and background any horse can harbor the mind of a champion.

She says proudly, “We always joke that Bear has the heart of Valegro and the body of a plow horse.”

About the author: Erin is an adult amateur dressage rider that loves talking about dressage. She’s been riding since elementary school, and was inspired to start dressage when she went over one too many jumps without her Thoroughbred. At the time, she had no idea what dressage was, but was told a little dressage training could benefit them. It didn’t take her long to get sucked ​into the sport and before long, posters of dressage horses replaced those of jumpers in her bedroom. Check out her blog at www.dressagetalk.com.

​Want us to feature your article? Send us an e-mail at info@betterdressagescores.com!