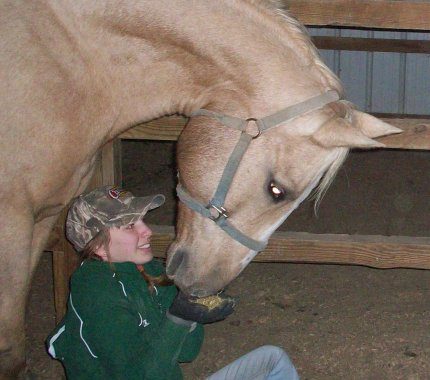 They say smells can bring back a lot of memories.

Have you ever smelled something familiar and about 100 memories came flooding back to you? I have, but let me back up some…

Back in high school, I got my first horse, Nike. I wish I could say she was the best thing that ever happened to me. That she’s all I had ever dreamed of owning since I was a little girl. But the reality was that she was barely broke, she was mean, and she’d buck anything breathing off of her. Just because she was technically my first horse didn’t make her my favorite.

But then came Sunny. He was 17 at the time, had been someone’s rodeo horse for many successful years, and wasn’t much for cuddles. All he knew was his job. And to work hard. 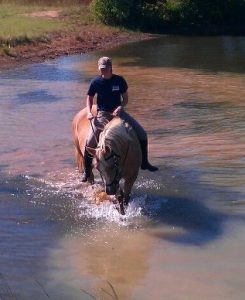 He brought his last owner to rodeos around the world, winning countless accolades during his career. But there came a day where no matter how badly he loved his job, his body wasn’t able for it anymore. So his owner found him a new home with us, to a place where he could retire in a pasture and be ridden on trails every once in a while. A pampering he deserved.

I was so lucky to be a part of his life, because that horse changed my world.

When I was in high school, my family went through Katrina and a nasty divorce all at once. I didn’t speak to my dad for over a year and my anger towards him was something I thought we would never recover from. I was so much like him and I didn’t know how to live without my favorite person around, but after what he did to my family, I never wanted to see him again.

As time went on, my mom pushed me to talk to him. As I slowly let my dad back into my world, a big part of our re-connection was heading to see the horses every weekend. I thought we were finally recovering what we had lost when I saw some pictures on my dad’s phone I shouldn’t have. They are forever engraved in my brain, even to this day.

I’m not sure how long I was asleep for, but I woke up buried in Sunny’s neck, while he sat there perfectly still and holding me up. To this day, I still remember his smell and how it comforted me. 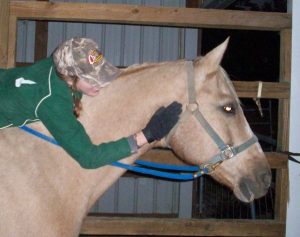 As Sunny grew older, I had to accept that he wouldn’t last forever. So when I was moving to Florida after college and Sunny was feeling his age, my only instructions to my dad was that when the time came, Sunny would let us know. He was a stoic horse, but the second he laid down and didn’t want to get up, it was time.

During my years of being Sunny’s owner, I was always within an hour’s drive from him.

Within two weeks of me moving away from him, I got the call.

But it wasn’t ok.

What was I going to do when times got tough and I just needed to sit on him to make me feel better? What would happen if my dad betrayed me again? What would be my escape from all the hard things I’m bound to experience in life? And what am I supposed to do with the pain I’m feeling right now?

As always, Sunny (and God) already had a plan in place for me to deal with my pain, both present and future.

While I was in Florida, I fell in love with an OTTB named Donovan’s Reef. I didn’t want another horse to tell you the truth, but there was something about him that I couldn’t explain. Something drew me to him. Maybe it was the familiarity he came with, seeing as he hated cuddles too.

A few months later, when my days as a working student were over, Reef came back to Louisiana with me. In the years of owning him he’s taken me farther than I ever thought imaginable, including winning many blue ribbons, teaching me valuable lessons, and competing in the 2017 AECs. 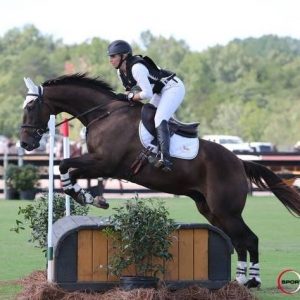 But the other night after a great ride, I was hugging Reef goodbye knowing full well he hates that, and I caught a whiff of something familiar. A smell that brought me comfort, peace, and so much happiness. I swear, as I closed my eyes, I thought I was hugging Sunny again.

And that’s when I realized something.

Sunny didn’t leave without doing his final job: making sure I was taken care of when he was gone. He sent me Reef so that I had someone to run to when things got tough. And even from horsey heaven, I know Sunny is watching out for me.